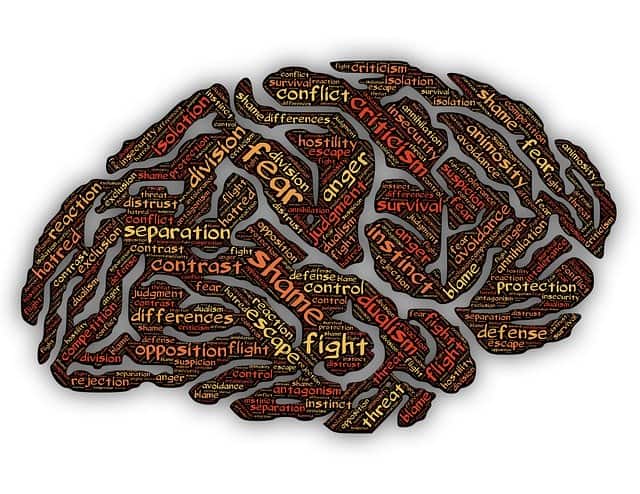 I was going to start this post by saying that every one of us has an inner critic who incessantly doubts us and shames us, whose voice is constantly in our heads—but having mistakenly read a Tweet by someone who is convinced that we suburban housewives will be voting for him this fall, I have to rephrase that.

Perhaps I can say that we all have an inner critic—it’s just that some are much louder than others, and some are so small that their very existence can be called into question.

I’ve drawn comparisons between the loud inner critics and the obstructionists I’ve known on a few Boards I’ve served—because let’s be honest, every board of directors has one—that negative voice that knows everything, criticizes everything, and is certain we can never succeed if we try something new.

In most cases, our inner critic is just trying to keep us safe, and this begs the question: “From what?” Sometimes the danger is not real but perceived.

There are two types of stress—acute (not cute at all) and chronic. And chronic stress can eventually lead to burnout, a situation in which our bodies start to shut down due to a never-ending flood of stress hormones that are throwing our other hormones out of balance.

Furthermore, stress can be physical, mental, emotional, energetic … or perceived, and our bodies don’t care: we have the same response to every type.

your body (and mind and spirit) under stress

When our brain senses danger—whether real or imagined/perceived—we unconsciously, instantaneously undergo a complex series of processes that result in stress hormones flooding our bodies, making us ready to fight, flee, or freeze.

Under acute stress, these hormones are broken down and gotten rid of, again without us having to think about the process: they’ve done their job and kept us safe.

Under chronic stress, however, those hormones hang around even as more and more are being produced. The bad news is that stress hormones that hang around in the body too long cause a lot of damage.

There is evidence that when the demand for the stress hormones is so high because we are always stressed and the body can’t produce them in the normal way, it cleverly “steals” another compound called pregnenolone and makes stress hormones from that. Good news, right?

Not so much—because that pregnenolone really ought to have been used to make other hormones, so now our system is even more out of whack: this is when the specter of burnout looms large.

I’ve spent this past week conducting a free 5-day “Goodbye, Burnout!” challenge—if you missed it, not to worry: it’ll be back!

Obviously, we didn’t reverse anyone’s burnout in five days, and I’m still confident that the participants learned a few basic principles and got started on that journey.

One thing that became even clearer to me as we progressed through the five days and checked in on Facebook is that our inner critics can make life really difficult for us, even when we’re trying to do something as good for us as reduce our stress levels.

If we can’t do something perfectly, we feel like failures, which causes us even more stress!

Some women would check in with the words like “total fail” and “fell short.” Their inner critics are so loud that they’re no longer just internal, and I want to honor them for opening up in that way.

If you can relate to them, I want to offer you (and your inner critic) a simple exercise.

watch your tone of voice

In my past life as a teacher of Mandarin, I could always get a laugh out of my first-year students by pointing out that one of them had just replaced the word “Mom” with the word “horse.” Same syllable, two different intonations. In fact, we could make a whole sentence using the syllable “ma” and its five tones—the result roughly translates to “Does Mom scold the paralyzed horse?”

Tone of voice can speak volumes, even more than the actual content of the words used.

And here’s my point: how does your inner voice speak to you when you perceive that you messed up? (And notice that again, it’s often your perception that you screwed up: did anyone else actually come out and say you did?)

When my clients feel like they’ve failed at something, I like to remind them that you can say the words “why did I do that again” in two very different ways:

Well, to be honest, I gave up listening to and reading most news media before the 2016 election because the news was only stressing me out. I saw women all around me fall into despair and walk around chronically stressed about the present and future, and I knew enough to get out while I could.

It’s really a way of reducing my own stress levels. Believe me, I still get the highlights despite my “news fast.” It’s hard not to in today’s over-communicating world.

It’s precisely what I work with clients on: figuring out what makes them tick, what stresses them out, and how to make the adjustments to their food and lifestyle choices that will reduce their stress and reverse their burnout—which comes with a host of other health benefits.

Burned out? Stressed? Curious about my work? Sign up for a free (and pitch-free) YOURstory consultation, and let’s talk!