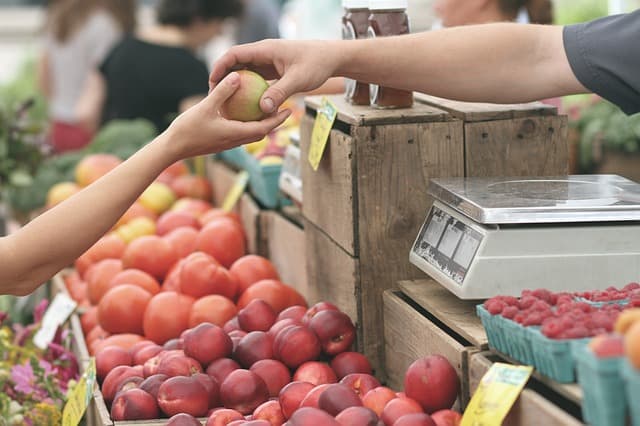 This month, we’re stepping away a bit from primary foods nutrition and focusing again on secondary foods, the ones we put in our mouths. As you find your way on your health journey, getting your food choices sorted can be what Charles Duhigg calls a keystone habit in his book The Power of Habit: a keystone habit is one that not only creates a desired change—it also has a cascade of other good habits that follow in its wake. This week, we’re taking a look at the question of local, the “L” in SOLE food. If you’re just joining us, there are two previous posts you can check out: seasonal and organic. 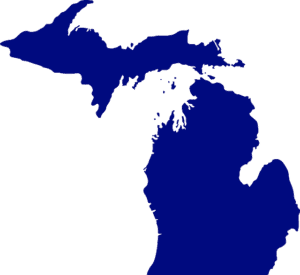 We moved to Michigan from California, land of eternal sun. For the first two years we lived there, my husband would open the blinds each morning and say, “Oh look—another sunny day!” After a while, I just threw pillows at him.

I know most people would think I’m crazy, but I honestly couldn’t wait to move back to an area of the country that has four seasons, even though I imagined it did mean leaving behind the availability of huge amounts of locally-grown produce year-round.

Fun fact: Michigan has the second highest crop diversity in the country after California! I think it has a lot to do with the fact that there are a lot of vegetables grown on the east side of the state, and a lot of fruits on the west side.

You might think that our relatively harsh winters would cause a short growing season (for you gardeners, Michigan ranges from hardiness zone 4a in the Upper Peninsula to 6b in “the mitten”), but there are a lot of hoop houses (passive solar green houses) in the state, and it turns out that I can get amazing local vegetables from “my” farmer 11 months out of the year!

Locally-grown fruits and vegetables not only last longer than those that have traveled thousands of miles and used up gallons of fossil fuel in the process—they will taste infinitely better, and some studies show their nutritional content is higher when eaten closer in time and space to where they were was grown.

And you get the pleasure of knowing that you are helping to support your local economy!

As I mentioned in the post about seasonal food, many farmers’ markets have rules about what farmer/vendors sell there—meaning that the food has to be grown by them within a certain radius of the market and is by default local as well as seasonal.

In recent years, I’ve noticed more and more attention paid by grocery stores—both the larger chains and the small independents—to what is grown locally. 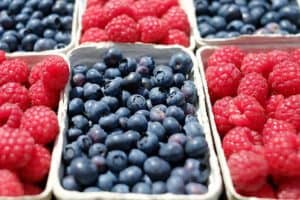 One day this summer, I watched a blueberry farmer unloading his berries through the front door of my favorite grocery store and straight onto a display inside: no unloading on the dock in back and sitting in the cooler for those berries! (Yes, they were delicious.)

In addition to having their own gardens, many institutions (hospitals, prisons, schools, colleges, etc.) are jumping on the local food train, and some have set goals to reach a certain percentage of locally-sourced food by a certain time.

The State of Michigan even has a local food charter with some very S.M.A.R.T. (specific, measurable, achievable, realistic, time-bound) goals for 2020!

“Local” can be a vague concept, particularly in a country as large as the United States. It’s sometimes defined by an arbitrary distance: people, restaurants, and institutions choose to source foods that come from within 50, 100, 150 miles of where they live. Or some decide to consider anything grown in their state as local—which is odd if you consider ginormous California compared to tiny Vermont!

I would estimate that 75-80 percent of what my family eats is local to our state (as I said, Michigan has LOTS to offer). Do we buy avocados from California? Yes. Do we buy asparagus from South America in the middle of the winter? No.

So I leave it to you to define “local”—if you just start reading the country of origin labels in the grocery store, I’ll consider my job in that department done.

Those big strawberries from Mexico at the grocery store may look pretty, but their taste can’t compare to the smaller (my kids would add “uglier” here) wild ones you can find at the farmers’ market. 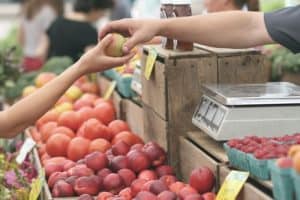 There’s nothing like waiting for strawberry season, then gorging on strawberries at every meal. By the time you start thinking, “I’m so sick of strawberries…,” it’s peach season!

If it’s important to you to have berries year round, consider buying flats of them when they are in season and freezing them. The concept of eating locally and in season can be extended to include local produce that you buy at the peak of freshness and preserve for eating later in the year.

That said, I also like author and food activist Barbara Kingsolver’s approach to eating locally in Animal, Vegetable, Miracle: when her family decided to live for a year only on food that they could grow themselves or obtain from very close by, each family member chose a “luxury” item (chocolate, coffee, bananas, etc.) that was allowed.

My own family’s banana habit is probably serious enough to support the entire economy of a small country (a banana republic, of course)! While I don’t eat them myself, I do choose to buy organic bananas, which is probably just my way of trying to offset the environmental damage caused by the amount of fuel it takes to feed their addiction.

There are inevitably some tradeoffs, particularly when you need to satisfy more than one family member. My advice: don’t get too hung up on it. As long as you are aware of the issues and consistently make your best effort to make informed choices most of the time, we’re all making progress.

If you are looking for ways in which to support your local farmers and producers and possibly lower your food cost while getting superior-quality food, check out Local Harvest, where you can find listings of a wide variety of direct-from-the-farm possibilities by searching your ZIP code.

Drop me a comment and tell me something about your experience with local food: What percent of your food is local? And are you trying to increase that percentage? What advantages speak to you most? Where were you surprised and pleased to see local food being sourced?