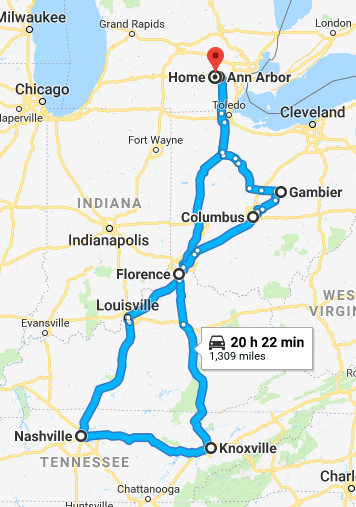 When I was growing up, it seemed as though my vacations never lined up with those of my parents, who taught at a small liberal arts college.

There may have been some outcry about this in the community because one year, the college switched which week it was on break … and the public schools did, too, with the result that we were still off different weeks, just in reverse order!

This March, my own family had three different vacations, none of which overlapped more than a weekend. I joked that being self-employed, I got to take all three … or, more realistically, work through all three! 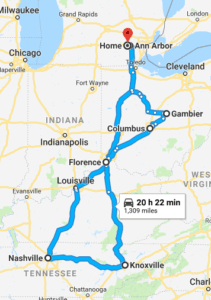 Our family doesn’t often go away on what my kids would call “real” vacations, and this year, I was determined to remedy that.

My son’s dream is to go to Florida for spring break—luckily, he’s at an age where it’s still about the fishing, not wet t-shirt contests and tequila.

Still, nope, not happening. I have exactly zero interest in going to the Sunshine State, and about -100 on the same scale for doing it during spring break season.

We compromised: I agreed to drive as far south as it took to get to an area where the fishing season was already underway (we’ve got another month or two or more to reach that point in Michigan) and we could get there and back in a week.

We agreed on Tennessee, and off we went: the boy, the dog, and a carload of fishing equipment. Oh, and me, the chauffeur. And because I’m a health coach, there was a lot of healthy food packed as well.

As much as I love driving vacations, I find that the largest food swamp in America is probably the US interstate highway system: while food abounds, almost none of it is what I would call healthy, and if you eschew gluten or dairy or have other food allergies or preferences, well, good luck to you!

There’s been an uptick in more decent food choices in recent years: In western New York state, I’ve seen and shopped at local farm stands at the rest stops. I do love that Panera seems to be making inroads in the endless array of fast food joints—this company is getting serious about what ingredients it uses, how they’re cooked, and in some cases even where they source them … and you can still make some very poor choices there.

But as a believer in whole, SOLE foods, the only solution really is to pack your own. As I loaded our cooler, I was thinking about the bubble I live in. 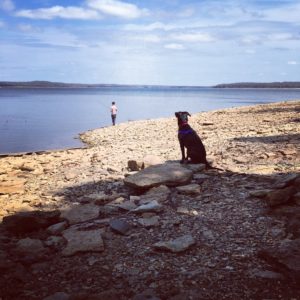 Ann Arbor is a lifestyle bubble: we have a fairly healthy, extremely liberal population, mostly due to income levels and a wide array of businesses who cater to those incomes—restaurants and groceries and farmers that feature SOLE food, gyms and personal trainers ready to get us fit, just about any type of spiritual community ready to welcome us, terrific hospitals to serve us when we’re sick, and many, many alternative medicine practitioners to help us avoid the hospitals in the first place.

As for the liberal part, my husband warned me—only half jokingly—that I’d best not take my current reading, David Litt’s Thanks, Obama, with me … or at least not into the breakfast rooms in the hotels.

It’s easy to disappear into our bubbles when they’re comfortable. When our daily lives are made easy by our surroundings and our own preference for routines and companions, getting out of them is not very appealing.

(My kids are rolling their eyes so hard I can hear them. And they’re muttering something about #firstworldproblems.)

In the past, I’ve often considered vacations a time to take a break, not just from work but from all this “being healthy”—sort of like the reverse of a diet!

This time, I decided to bring my healthy lifestyle on the road with me, and it really didn’t take much effort beyond packing the food and making a few small mindset shifts.

In the past, we would have driven as far as possible each day, but the facts that 1) I was the only driver and 2) we had the dog with us meant that we had to stop for a considerable amount of time every few hours and we chose hotels near public parks (one even had its own dog park—shout out to the Holiday Inn in downtown Knoxville!) It turns out that you can still get in 10,000 steps or more if you take this approach—just watch where you’re stepping at the rest areas….

An added bonus: my son caught a trout at a rest area along the Caney Fork River that even had a separate “angler parking” area, one we would have missed if we were bent on a destination rather than enjoying the journey.

Another added bonus: family time. We made a detour to Nashville to visit my youngest niece—the cousins don’t get to see each other that often, and it was fun to catch up with her as an adult in her new home.

And on the way home, we caught up with my daughter at college in Ohio—always good to sneak in a hug between vacations!

We ate our healthy food for breakfast and lunch and ate dinner out, aiming for decently healthy—again, Knoxville knocked itself out for us, having several affordable options that paid attention to whole, SOLE foods (shout out to Tupelo Honey and Blue Coast Grill + Bar!)

We didn’t stay up particularly late, so getting up earlier than the boy and the dog was not a problem—I still had plenty of “me time” for my morning routine (and yes, for things like checking email and doing a little bit of work as needed).

Living a healthy lifestyle—making the primary and secondary food choices that best support our health—is really a journey. It takes time, first to learn about what choices work for you, then to practice into them until they become habits to the point where you feel so good that the healthy choice is the easy choice.

I often tell clients that the most important mind shift they can make is away from the instant gratification mentality that’s so prevalent today: there is no silver bullet for health.

The overwhelming majority of us who are overweight and suffer from the so-called chronic diseases started out healthy. It took years of poor choices to get where we are—and it can take years to reclaim our health.

If taking the time to get healthy sounds overwhelming, then I ask clients to consider this: even the smallest action over time can make them healthier. And there are no side effects to making better choices, only gradual, sustainable improvement of our health.

Making a healthier choice can be a tiny baby step taken once a day, something as simple as adding a glass of water before every meal. 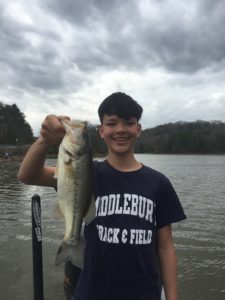 That’s it? Yes, that’s it. And when you have made that a habit, add one more healthy habit. Can you take a 10-minute walk around the block at lunch?

That’s it?? Yes, that’s it. And when that’s a habit, can you take 10 minutes to just take a few deep breaths and relax your body before bedtime?

As a health coach, I can see the relief in their eyes that I’m not going to demand that overnight, they completely overhaul their eating style, take an hour to work out daily, and take up serious meditation … because we both know that ain’t gonna happen, at least not initially.

If they’re floored by the idea of cooking from scratch 21 meals a week, I share that it took me more than 10 years to get there. And it’s taken me at least another five to hit the road and find ways to make the healthy choice the easy one—even on vacation!

Drop me a comment and let me know, what’s your favorite tip for healthy road trips?