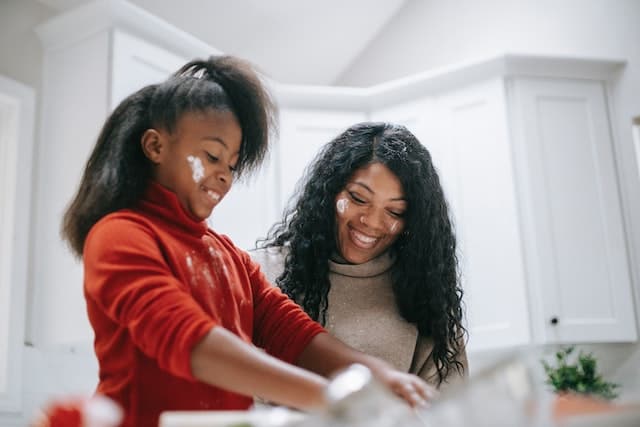 back to basics | cook from scratch

Cook from scratch?!? But that’s so much work….

Last week, we kicked off the “Back to Basics” series by talking about whole foods and how as a health coach, I sift through all the nutrition info out there so you don’t have to. This week, we’re taking on my second food rule: cook from scratch.

If you recall, my “food rules” are as follows:

When I do workshops on healthy food choices and meal planning so that we can cook from scratch more regularly, I often start with some unscientific research about the audience.

It all begins with a poll. “Raise your hand if you eat family dinners at home (this includes takeout) at least 1 night a week?” Followed by, “Keep your hand up if you do it [2,..7] nights a week.” Yeah, by 3–4 nights a week, I’ve lost more than half of the audience.

Why is that? Well, for starters, we’re busy: jobs, school, extracurriculars, sports….

And secondly, food is everywhere—and until recently, it’s been fairly affordable if not downright cheap. (One could argue that we’re not talking about real food here.)

where is food sold now?

I ask my audience to list some places they’ve seen food for sale recently where it didn’t used to be available. (You have to be at least 50 to answer this question in a meaningful way, I think.)

My favorite answer comes from my own experience in Ann Arbor. The newest branch of the public library prominently featured a café—and you could take your coffee and snacks into the stacks.

Little old library ladies were fainting all over the place, for sure.

Not-so-fun facts (many taken from Dr. Mark Hyman and The Family Dinner Project) about food available outside the usual places it used to be found, namely grocery stores, farmers’ markets, and restaurants:

What are the benefits of eating family meals at home (whether you’ve cooked the meal or not)? In children, we see:

In summary, children who have regular meals with their caregivers do better in every way, from better health to better grades, to healthier relationships, to staying out of trouble. And adults see similar benefits.

Pre-pandemic, I lost most of the audience around 2–3 times a week. During the height of the pandemic, it went up slightly (you could see the resentment in people’s faces). Now it’s back down.

And yet, just about everyone loves a cooking show.

And finally, taking us back to last week’s topic—whole foods, a finer point on the question of cooking at home.

“How many of you cook from scratch at home?” (Before you answer that, cooking from scratch means no mixes, cans, spice blends, prepared salad dressings, pre-marinated cuts of meat, etc.)

cook from scratch at home

Remember what a whole food is? Here’s why this is such an important concept! Let’s take a look at some of the dangers in our reliance on processed foods.

I think you can’t really dispute that the rise in obesity and related health issues is traceable to our eating habits—and cooking practices or lack thereof.

And besides, doesn’t mom’s/grandma’s food (I guess now I might want to say grandma’s/great-grandma’s food) always taste better due to that dose of Vitamin L (Love!) she adds?

So can we agree that cooking from scratch and eating family meals are two very important health goals? (Don’t worry, “family” can be you, you and your partner, you and your kids, you and your friends, even you and your cat. (And if you like a bit of wine with your dinner, it’s not drinking alone if the dog is home with you.)

Well, you might be thinking, that’s all well and good. But I have no clue how to cook from scratch and/or no time to do it on a regular basis.

Have I got news for you! Part of my work as a health coach is rooted in my education in culinary arts. Yup, I actually studied how to cook. And as I mentioned last week, a big part of my coaching practice consists of setting you up for success—including in the kitchen. And my goal is to make that feel easy.

If you’re starting to think there’s something to cooking from scratch using whole foods and you have no clue how to begin, join me for my monthly virtual cooking demos! If you’re an employer who wants to empower your team, group rates are available. And you can choose whether your employees are paying for the demo or you want to cover it. Send me an email and let me know you’re interested! Individuals can register on Eventbrite.